Global warming is a change in global or regional climate patterns, in particular, a change apparent from the mid to late 20th century onward and attributed largely to the increased levels of atmospheric carbon dioxide produced by the use of fossil fuels and other human activities.

Although there is much debate in the political sphere there is a growing consensus in the climate science community with a nearly unanimous 97% believing that global warming is happening – scientists agree that the trends observed over the last past century are most likely due to human activity.

There are many repercussions of global warming: Rising sea levels, Ocean acidification, increased frequency of natural disasters and catastrophic weather events like the four “1 in 500” level hurricanes that have been (and are) battering the Caribbean and the US east coast recently, Coastal and onshore Flooding, Longer and more destructive wild fire, more frequent and intense heat waves and global temperature rising.

Researchers have found that economic, emissions, and population trends show that there’s only a minute chance that the Earth will avoid warming more than 2 degrees centigrade by the end of the century. One of the first scientists to warn of the dangers of climate change, Professor Jim Hansen, warns that “shit is hitting the fan”. In a recent presentation, he is quoted as saying: “We’re too late to stop global warming with just renewable’s, we need to do something much more drastic”.

An international team of researchers, led by Professor Jim Hansen, Nasa’s former climate science chief, said that the world has already overshot targets to limit global warming to within acceptable levels and was “sufficiently grim” to force them to urge “rapid emission reductions” They also warned that efforts would need to be made to reduce the amount of carbon dioxide in the atmosphere by about 12.5 percent.

A paradigm shift is urgently needed if human life is to continue to prosper and to function in the way we have become accustomed to. For there to be a brighter future than this grim outlook, we need a drastic overhaul of our cultural and personal consumption habits in the present.

The daily depletion of destructive resources such as petroleum, plastics, wood for timber, paper, etc, petrol for machinery, polyester, and other synthetic materials used in clothing, textiles, and industry is playing a pivotal role in the acceleration of climate change. These products could be produced from cannabis without the environmental cost, and the fact that they’re not is likely a byproduct of the global prohibition and demonisation of the cannabis plant.

Other environmentally detrimental actions by humans include behaviors such as the mass exportation of industrialised animal agriculture by countries like Brazil, India, and Australia, the three largest exporters of beef. Cattle ranching is an activity that requires vast areas of land to be deforested to create space to graze them and tens of thousands of gallons of water and tons of feed to sustain and raise the cattle.

Cattle ranching is now the biggest cause of deforestation in the Amazon. Nearly 80 percent of deforested areas in Brazil are now used for pasture and the remainder mainly being mono crops such as Soy, which is largely used as feed for the cattle. A large proportion of these trees are felled illegally and with little regard for local wildlife or preservation of endangered species.

It is a symptom of the modern world tragedy, we find ourselves cast in that one of the most bio-diverse places on the entire planet is being decimated to graze cattle ultimately destined for a quarter pounder, happy meal, or milk on our morning cereal. There is hope yet: India, previously a large exporter has banned the slaughter and sale of cattle which will reduce the global availability by 20%. However, this is likely to be quickly capitalised on by the Australian market ramping up its operations, negating potential beneficial offset to the environment.

Incentivising the farming of Hemp/Cannabis on an industrial scale would massively help to offset a lot of the destructive environmental consequences of climate change. For example, switching all toilet roll, newspapers/magazines, greetings cards, wrapping paper other packaging to Hemp would not only save billions of trees annually, but also in the process would literally suck in carbon dioxide from the atmosphere. The net carbon sequestration of an industrial hemp crop is estimated at 0.67 ton/hectare annually.

Humans fell something like 15 billion trees each year (wow, more than two for every person on the planet, nice one humans) and the global tree count has fallen by 46% since the beginning of human civilization. This is a problem when you consider that trees are vital in capturing carbon and turning it into oxygen through photosynthesis.

Trees also drill water deep into the ground helping to avoid surface flooding and provide an ever-replenishing biomass for ground soils, providing nutrients and the perfect conditions for other flora and fauna to flourish in a rich base that is held together by the root structures of the tree preventing soil erosion and desertification.

In England, we have lost half of our irreplaceable ancient woodland since 1930. “Forests are being lost to development and infrastructure; we are cutting a lot and planting so few, so it may be that England is technically deforesting,” said Stuart Goodall, chief executive of CONFOR the trade association for the UK forestry industry.

Only 1.35 million trees were planted in England in the 18-month period from April 2015 to September 2016 this steep decline in tree planting means the current government is almost certain to miss its manifesto commitment to plant 11m trees in the UK in the lifetime of this parliament.

The 11 million target is neither ambitious nor linked to any policy objectives. It is simply a continuation of the number of trees planted by the 2010-2015 government. We should be planting exponentially more than 11 million trees in the lifetime of this parliament and future governments. The legalisation of cannabis is coming whether anyone likes it or not and its industrialisation is a necessity when you’re faced with the fact that the UK is currently heading toward deforestation.

Another result of deforestation is the massive amounts of pollution that cannot be captured and stored leading to the situation we have here in the UK where we have high levels of pollution and air quality so poor that it is causing 40,000 deaths every year.

Deforestation is also one of the main contributory factors to onshore flooding as it drastically alters the flow of waterways, streams and rivers coupled with drastically more powerful storms leads to flooding in locations that previously had been untouched by seasonal rains for generations.

The number of people exposed to flooding each year is at risk of tripling from 21 million to 54 million by 2030, according to a study by the World Resources Institute
This would result in the economic cost of flooding increasing from £65 billion to around £340 billion.

This could in part be negated by the immediate ceasing of the felling of billions of trees and the mass planting of cannabis/hemp and switching from the former to the latter for all potential fabrications that we produce. If done on a large enough scale, this would help to combat climate change through not just deforestation, but also, phytoremediation, a process that using green plants removes, contains, or replaces contaminated soil. Cannabis/hemp can be utilised to detoxify, desalinate, and remove irradiated and heavy metal contaminants. It is considered to be one of the most cost-effective and environmentally-safe cleanup processes available.

The cannabis plant was even utilised in the aftermath of the Chernobyl disaster with thousands of industrial hemp plants being planted to help deal with the radiation in the topsoils. Japan is considering using the same method to aid in the cleanup of the Fukushima exclusion zone. However, this is impeded by the draconian hemp license laws enforced on Japan by the US in 1948.

Global warming will create millions of climate refugees in the coming century, all of whom will need housing, food and other resources. Unless nations and international organisations start acting now we simply will not have what we will need.

Designing and creating new homes out of cannabis is a carbon-negative process – Hempcrete is a mixture of cannabis hurds and limestone used as a material for construction and insulation. Its sustainable, recyclable, carbon negative, lightweight, mold, moisture resistant, and non-flammable. 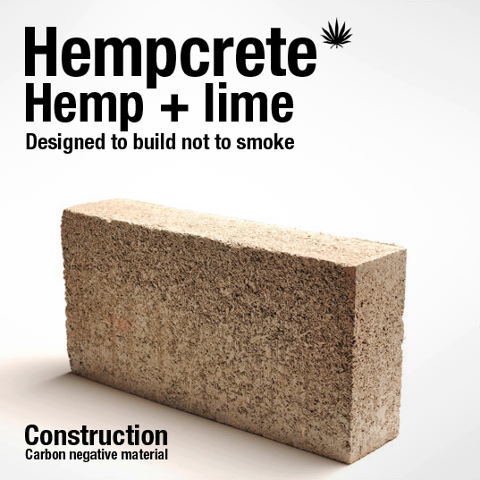 Cannabis plastics can make anything traditional petroleum-based plastics can without the need to fabricate a war in order to secure a resource through foreign interventions and the game-changer Cannabis Graphene.

Cannabis Graphene is comprised of a lone hexagonal honeycomb lattice layer of tightly packed carbon atoms, it is one of the strongest, lightest, and most conductive compounds ever discovered. It’s a British invention that was first discovered in Manchester, where they built an institute for developing the technology that was supposed to build the northern powerhouse.

Graphene is 100 times more effective conductor than copper, lighter than air, and stronger than steel. It’s currently being made from graphite/coal and is retailing at around $2000 per gram. However, when produced from cannabis, it’s $500 per TON, To put that into perspective, that’s 907,185 grams at a saving of $1,814,369,500 Although cannabis-derived graphene cannot do everything graphene can, its energy storage capacity is equally efficient at a fraction of the cost.

Cannabis graphene superconductors could literally be grown to store whichever renewable is most suitable for that location, be it Tidal/Wave, Solar, or Wind. Utilising this technology would negate the need to secure vast amounts of Lithium what is now a proven inferior battery technology and could save Afghanistan from its impending “liberation” as it has been discovered to have a trillion dollars worth of Lithium deposits.

Wider adoption of various Industrial Cannabis technologies could provide the energy needed to ensure that no country would be forced to exploit one of the most dangerous, detrimental, dirty and destructive energy production processes, fracking.

If at this point in human history we deny cannabis as a tool to help prevent climate change because of successive decades of racism, reefer madness, and propaganda then we deserve to reap what we have sown.