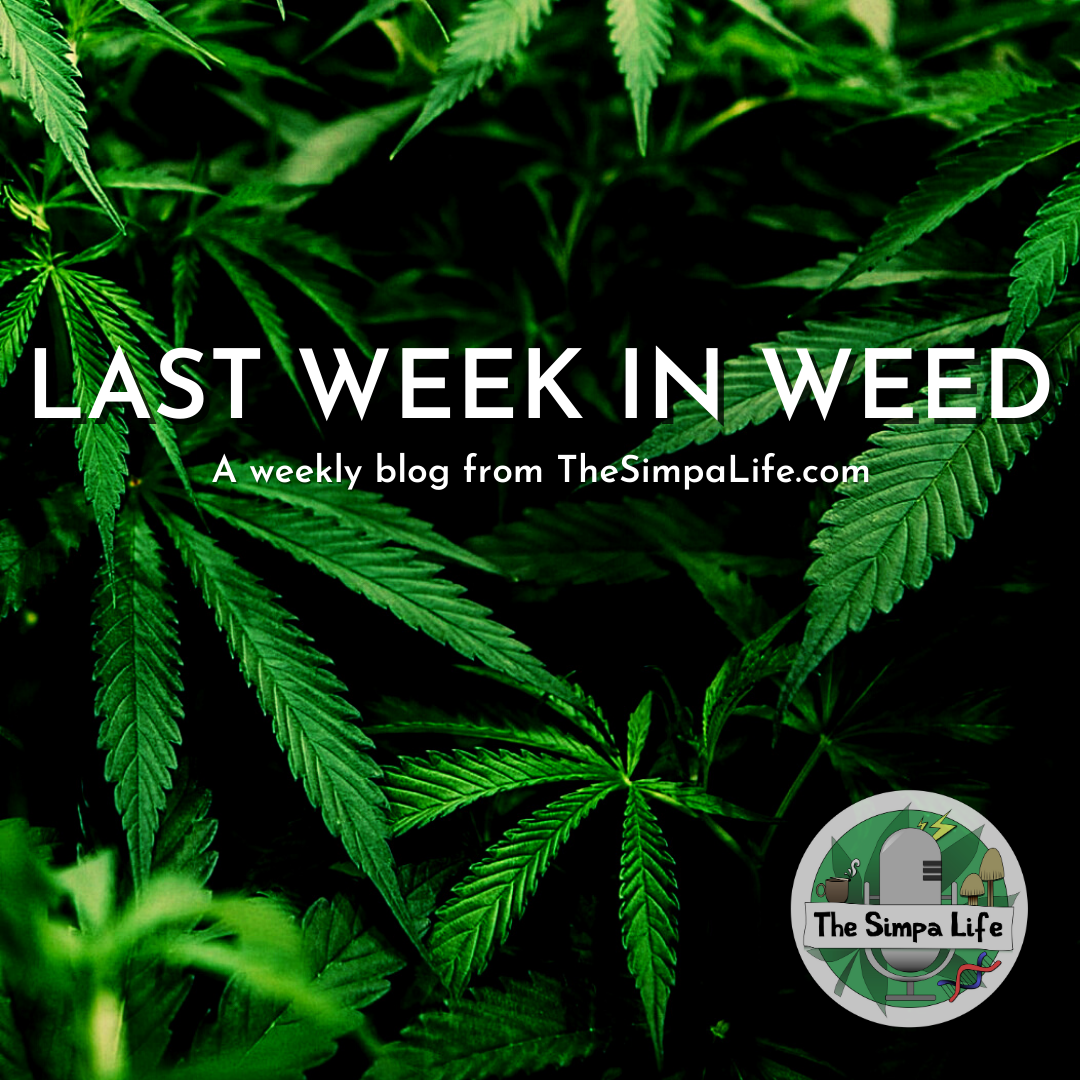 In this week’s issue of Last Week In Weed, We’ll be looking at a new study from the US National Institute on Drug Abuse (NIDA) that suggests there is a link between young adult cannabis consumption and suicide ideation, a UK man who suffered a violent psychotic episode after consuming some ‘laced’ cannabis, and finally, the UK cannabis industry expresses concerns over TIGRR recommendations.

A new study titled “Associations of Suicidality Trends With Cannabis Use as a Function of Sex and Depression Status”  published last week on the JAMA Network Open suggests a possible link between cannabis consumption and suicide ideation in young Americans.

This data suggests that “cannabis use was associated with higher prevalence of suicidal ideation, plan, and attempt among US young adults with or without depression, and the risks were greater for women than men.”

This meta-data analysis study attempts to take so-called cannabis use disorder (CUD) and major depressive episode (MDE) into consideration by adjusting for them within their published findings. Their analysis of the selected data revealed that cannabis consumers have a higher propensity to report suicidal thoughts or suicide ideation.

“Suicide is a leading cause of death among young adults in the United States, and the findings of this study offer important information that may help us reduce this risk. Depression and cannabis use disorder are treatable conditions, and cannabis use can be modified. Through better understanding the associations of different risk factors for suicidality, we hope to offer new targets for prevention and intervention in individuals that we know may be at high-risk. These findings also underscore the importance of tailoring interventions in a way that take sex and gender into account.” – lead author Beth Han

Interestingly, the study revealed an abominably in their data, it seems to show that women who use cannabis, at any rate, have higher levels of suicide ideation than men. This study provides some insight into suicide ideation in young Americans but it is greatly let down by its design. The study is too limited in its scope and doesn’t take into consideration the myriad of other factors that are detrimentally affecting the generation of individuals selected for their analysis.

This generation of young adults is more informed than any before them. They are acutely consciously aware of the impending climate crisis, They are witnessing socio-economic collapse and the final phases of late-stage capitalism. They were born into a new digital age and given all knowledge and information in the palm of their hands, but no way to utilise it constructively – and we expect them not to be at least a little bit fucking suicidal?

This study also does not take into consideration that during the period that was examined the prevalence of cannabis use amongst adults in the US doubled from 22 million in 2008 to 45 million in 2019. A number that will continue to rise as more and more US states ‘legalise’ adult consumption of cannabis.

So ultimately I believe that all we are seeing here is proof that young American adults who are conscious of the misery and suffering around them are choosing to relieve that anxiety and existential crisis by consuming cannabis, instead of the far more socially acceptable traditional drug that is highly prevalent in our society and has a far higher associated risk of suicide.

It has long since been established that there is a strong link between alcohol consumption and suicide attempts. One study of 58,000 US suicides found that 1 in 5 suicide victims had an elevated blood alcohol level. This increases to nearly 1 in 4 when focusing on male-only suicides.

Interestingly, unlike cannabis consumption women are associated to have fewer issues with suicide ideation than men. This study titled “Acute alcohol intoxication and suicide: a gender-stratified analysis of the National Violent Death Reporting System” also revealed that this seems to be an issue far more prevalent in younger Americans than the older generation. Whether this is due to different generational philosophies or ethics or down to some of the factors we discussed above is still up for debate.

Further reading material: “A closer look at substance use and suicide” and “Suicidal behaviour and Alcohol abuse”

This week’s second story is another propaganda hit-piece from our favourite UK local media conglomerate, Reach PLC. The piece we’ll be looking at is from the Manchester Evening News. It’s titled; “’Kind and gentle’ vegan who ‘abhors violence’ attacked mum with knife after using ‘laced’ cannabis”

Immediately, you can feel the tone of the piece in the words that were chosen for its title. ‘Kind and gentle vegan who abhors violence’ juxtapose to ‘attacked mum with knife’ attempts to make the reader sympathise with the man who consumed the ‘laced’ cannabis. A tone you do not often see from mainstream media outlets, especially Reach PLC properties.

The initial incident happened in August 2020 when a man from Wigan in his late 40s consumed cannabis suspected to be laced with a synthetic cannabinoid after returning from work to his mother’s house.

He told his mother that he was going upstairs to bed, before coming down 10 minutes later while ‘shaking’ and ‘crying’, saying he was ‘sorry’ before he told his mother that ‘he had met someone who was the ‘messiah’ who told him he was ‘the devil’ and that he had to kill her’ He apologised and left the room before returning with a knife and violently attacking her.

The man’s octogenarian mother ‘struggled’ with her son suffered cuts to her hands and neck. Fortunately, she was able to escape and raise the alarm with neighbours that had already heard ‘loud screams’ coming from the house.

When police arrived on the scene the man was holding a large fork and knife, before being tasered by police for non-compliance. Luckily the woman only suffered minor superficial wounds to her hands, neck, and ear. She has since made a full recovery.

Further, still, she not only forgave her son for the incident but also recently attended court to support him during the trial which saw him convicted and sentenced to 20-months in prison.

When the man was asked later by health care professionals why he had attacked his elderly mother, he said it was ‘impossible to explain’. Police searched the man’s room after the incident and found five bags of cannabis in his bedroom weighing a total of 5.64g.

Their toxicology reports confirmed that he had used cannabis during the attack. Unfortunately, no tests were conducted on the cannabis for adulterants or contaminants by the police, so we will never know what synthetic cannabinoid or other compounds that could have caused this extremely rare and unexpected violent reaction to the consumption of cannabis.

During the recent trail, the court accepted that the cannabis the man consumed was likely adulterated or ‘laced’ with an unknown synthetic cannabinoid which would explain the ‘wholly unexpected effect’ on the man’s state of mind. Perhaps the reason the charge was reduced from attempted murder to the lesser charge of section 20 assault.

“To describe this as out of character is to make a gross understatement. Fortunately, your mother’s injuries were not as serious as they could have been. She forgives you absolutely and simply wants you to return home. If nothing else, this case serves to illustrate in perhaps the starkest of terms the dangers of consuming illegal drugs” -Judge Hilary Manley

Following a lengthy pre-trial detainment the man will soon be up for release from prison having served his sentence on remand. His mother has expressed that she wants him to move back home when he is released from prison. His defence solicitor Philip Clemo has said that “He is never going to take cannabis again, because he has just had the worst year of his life”

If nothing else this makes an excellent argument for the urgent need to create a regulated adult consumer market here in the UK to prevent adulteration and any risk of similar incidents occurring in the future.

Spice has already become a serious problem within certain vulnerable populations, we do not need to risk it spreading into the estimated 5 million+ cannabis consumers in the UK.

Unlike most other drugs the consumption of cannabis isn’t associated with an increase in violent behaviour. There are a small number of individuals that may have an adverse reaction, suffer the early onset of a pre-existing mental health condition, or even have a temporary psychotic episode but generally speaking, cannabis is still globally regarded as one of the safest so-called ‘recreational drugs’ for most individuals.

Our final story this week is the UK cannabis industry expressing concerns about number 10’s plans for the ‘Hemp’ (Industrial cannabis) and CBD industries. As covered previously in last week’s issue of Last Week in Weed, the new TIGRR task force has published recommendations for the UK’s cannabis industry.

This week the industry is responding with far less fanfare having taken the time to digest the consequences of adopting such restrictive recommendations. The ‘Hemp’ and CBD industry are now responding with a mix of confusion and annoyance at the either ignorant or corrupt TIGRR proposals.

“The report and its advisors demonstrate a complete ignorance of the law and the industry as the only medicinal products available in the UK are those made by GW Pharmaceuticals. The CBD industry is a food supplement industry not a medicinal one.” – Steve Oliver, Director at The Canna Consultants

It is worth mentioning up front that the TIGRR’s recommendations are incredibly similar to those presented by the Centre for Medicinal Cannabis (CMC) and the Association for the Cannabinoid Industry (ACI) Both bodies co-founded by Steve Moore, who is a long-term contact of George Freeman MP, one of the three TIGRR report authors.

Knowing this it becomes a lot easier to see why their recommendations seem so restrictive and stymieing. The companies that pay their £25,000 a year membership fee to the ACI and the CMC don’t want an under-regulated or free-market preventing them from medicinalising, pharmaceuticalising, and monopolising the entire UK CBD and ‘Hemp’ industry.

“Tailoring regulations to support research into the medical benefits and risks of cannabis is right in line with the spirit of the UN rescheduling of cannabis last December, as well as the repeated calls from national institutes such as NICE who have stated that more research into medical cannabis is needed. Our hope is that these statements will be translated into regulations in the near future” – Barbara Pastori, Consulting Services Director at Prohibition Partners

These recommendations have caused much confusion and anger within the domestic CBD industry as companies have spent the past few years preparing for regulation under the Food Safety Authority (FSA) following the 2016 declaration that CBD was a novel food supplement and not a medicine. The industry feels this is an unnecessary move that would only further hinder the growth of the domestic CBD and ‘Hemp’ (Industrial Cannabis) industry.

If these recommendations are adopted the entire CBD industry could find itself reclassified as a medicine. This would immediately create several insurmountable obstacles to most of the small to medium-size producers and sellers here in the UK that simply wouldn’t be able to afford to pay to play in the ‘medical cannabis industrial complex.’