In this week’s issue New German coalition signals that it might ‘legalise’ the adult consumption of cannabis, Cannabis edible blamed for man’s psychotic episode that resulted in him murdering his partner, and finally Police in Oregon seize 250 tons of ‘illegal’ cannabis at just one location.

First up this week is the rather exciting news that the newly formed potential future German coalition government may ‘legalise’ and regulate the sale of cannabis for adult consumption. The incoming political alliance of the Social Democrats (SPD), Green party, and Free Democrats (FDP)

which has been dubbed the ‘Traffic light parties’ have indicated that they will seriously consider ‘legalising’ the possession and trade of cannabis.

The new political partnership published a report by its internal working group on health and care. In it, they lay out the coalition’s intentions to ‘legalise’ the sale of cannabis for adult consumption to help control and regulate quality, remove adulterants and potential contaminants, and restrict youth access. Perhaps this focus has something to do with the recent rumour in Germany that cannabis was being laced with heroin. See Max Daly’s Vice piece about Germany’s heroin-laced cannabis myth for more.

The authors of the paper state that “We are introducing the controlled distribution of cannabis to adults for pleasure purposes in licensed shops.” This is contingent on a major evaluation of the new legislation after four years to assess its social and health impacts. The working group also expressed a desire to expand drug testing and access to harm reduction measures and services across the country to help reduce any potential harms created and amplified by drug prohibition.

Interestingly, the traffic light parties have also declared their intention to tighten regulations pertaining to marketing, advertising, and sponsorship of alcohol, nicotine, and cannabis products and brands. “We measure regulations again and again against new scientific findings and align measures for health protection” states the health and care report paper.

Although all three parties campaigned on a platform to ‘legalise’ cannabis. Only time will tell if the three parties keep their election promises and now their collective commitment to ‘regulate the sale of cannabis’ in Germany. However, all three at least appear to have the same non-fiscal motivations for ending the prohibition of cannabis sales in Germany.

None of the parties discussed blustering the treasury reserves or the potential financial gains. Indeed, none of them chose to highlight the recent report from the Institute for Competition Economics (DICE) at the Dusseldorf Heinrich Heine University. The report found that a potential ‘legal’ market in Germany could add €3.4 billion through taxation and save an estimated €1.3 billion in policing and judicial costs

Instead, they all pointed to social issues over economic ones. They intend to prioritise youth diversion/protection, disempowering illicit markets, proving better dependency support, and desire to see an end to the arbitrary criminalisation of all cannabis consumers on faux-moral grounds.

While I can appreciate the sentiment, it still nevertheless rings hollow in my ears. I cannot help but feel that if the coalition is successfully formed and does manage to pass its legislation through the Bundesrat, that little will really change for regular German cannabis consumers. They will still potentially face the same arbitrary criminaliastion, increased taxation, strict regulations, and the whitewashing and gentrifying of their cannabis culture.

I am aware that information and the finer details are yet to be revealed, however, there has so far been no public discussion that I can see about social consumption spaces, expungement of prior convictions, true social equity programs, minority/marginalised participation schemes, or the ‘legalising’ of growing your own at home. Without these elements, it feels rather disingenuous of the traffic light parties to paint themselves as though they aren’t simply doing this for the money.

If passed this new legislation would see Europe’s most populated and wealthiest country become the continent’s biggest cannabis market. It would dwarf efforts to commence small-scale trails in fellow European countries like The Netherlands and Switzerland in 2022. It could also potentially leave ‘decriminalisation-plus’ models in Italy and Luxembourg looking a lot less desirable to the likes of CuraLeaf that are eager to start seeing dominoes fall in Europe.

Next up this week is the tragic story of a UK man suffering a psychotic break that led to him brutally murdering his then-girlfriend. Although this story is still unfolding and details are still emerging the mainstream media have quickly jumped on it to overemphasise the fact that the man had consumed a ‘cannabis brownie.’

This terrible incident is made all the more harrowing given the fact the victim recorded the whole thing on her mobile phone. Details are still scarce about the contents of the brownie or the man’s mental health history. The papers seem more interested in directly implying that the young victim died solely thanks to the man’s consumption of a ‘cannabis brownie.’

The episode occurred in the early hours of November 20th, 2020 after the man is alleged to of consumed a ‘cannabis brownie’ earlier in the evening. The man is then suspected to have suffered an ‘adverse reaction’ or a temporary psychotic break. This led the victim to search online for advice on the internet about how to deal with a “bad weed trip.” She then began filming her partner “like something out of the movie Scream” according to the prosecutor Deborah Gould.

The jury was told that the nearly-17 minute long audio recording captured the moments leading up to the murder, the murder itself, and the aftermath. The recording is reported to begin with the victim laughing and the man accusing her of laughing at him. The court heard how the man became aggressive around nine minutes into the recording shortly before he attacked her “at first with his bare hands.”

The man then proceeded to strangle and stab the victim more than 30 times before the recording captures the man saying “I am going to make sure.” The sound of an engine revving and a thud is then heard as he then allegedly ran over her lifeless body in his car. Neighbours who reported witnessing the event said he took no steps to help her before walking back into the house. A call to 999 was received at 01:32 AM, informing the operator that he had “been told I have killed my girlfriend.”

During five separate police interviews, the man offered ‘no comment’ instead of providing a statement that suggested that the ‘cannabis brownie’ he had consumed contained another drug that induced his psychotic state. The man was then evaluated by three different psychologists who concluded that he had an ‘adverse reaction’ to the consumption of the ‘cannabis brownie.’

During opening statements of the murder trial the defense barrister Andrew Fisher QC told the jury at Stafford Crown Court that the defendant had suffered an “extreme florid psychiatric episode in the course of which he totally lost touch with reality and became wholly delusional”.

The prosecutor Deborah Gould countered this by telling the jury that the defense’s case does “not provide a defence in law.” Going on to state that although it was believed that he had suffered an adverse reaction  “A disordered intention caused by self-induced ingestion of an intoxicant is as good as a sober intention.”

The trial is continuing so more information is due to be made public in the coming weeks. Hopefully there will be a toxicology report that can provide further insight as to what the ‘cannabis brownie’ contained. As well as more detail about the man’s mental health history.

There are a few possibilities here, one is that the man is correct and that the alleged ‘cannabis brownie’ contained another psychoactive substance unknown to him at the time. I can tell you from personal experience that taking one drug thinking it’s another can cause confusion, disorientation, and unpredictable cognitive functionality.

Sticking with adulterants it could also be a synthetic cannabinoid receptor agonist (SCRA) which have been shown in certain populations to induce all manner of mental and physical health problems – including psychosis type conditions.

Another potential culprit here is the moulds, pesticides, and chemical fertilisers used in the cultivation of commercial-scale cannabis by criminal organisations. The consequences of combusting certain moulds have been linked to psychosis-type events. The same is theorised of particular compounds found in ornamental and non-consumable agricultural grow mediums and feeds.

While it isn’t fair or accurate to say that cannabis causes psychosis. There are some extremely rare incidences of cannabis consumption precipitating temporary psychosis-like illness in a tiny minority of consumers. However, this is most often linked to pre-existing and undiagnosed mental health illnesses. So it’ll be crucial to see if the man has had a history of mental illness.

While this event is deeply saddening and tragic for the victim and her family. It has the opportunity to highlight the urgent need to tackle the consequences of prohibition. Issues of drug adulteration, non-existent regulations, and a lack of basic drug education for consumers.

This article is not intended in any way to diminish, dismiss, or defend the actions of the man in this story and I will endeavor to continue to cover this case as more information comes to light.

In the statement the Oregon state police declare that they seized firearms and discovered and subsequently arrested more than 100 individuals on-site including some undocumented workers that were living there in poor conditions.

A total estimate of 250 tons (500,000lb or 226,796kg) of raw cannabis was seized during the operation. The authorities are claiming that the haul has an estimated street price of $500 million and will take them quite some time to investigate.

The tiny community with a population of less than 10,000 is located in Southern Oregon in Jackson County close to the Californian border. Although Oregon ‘legalised’ cannabis back in 2015 it has since been fighting against an ever-increasing number of ‘illegal’ operations and farms.

In early October 2021, Jackson County’s Board of Commissioners declared a ‘state of emergency’ having become ‘overwhelmed’ by the scale of illegal cultivation in the region.

The board warned of an “imminent threat to the public health and safety of our citizens from the illegal production of cannabis in our county.”  Jackson County Sheriff Nathan Sickler claims that the local crime rate has gone through the roof due to the influx of ‘illegal’ cannabis farms.

“We’ve had stabbings, robberies, thefts, burglaries, homicides, sex crimes, motor vehicle accidents, DUIs, all related to the influx of the marijuana-cannabis industry in our in our valley. It is certainly an issue we deal with on a daily basis here” – Nathan Sickler Jackson County Sheriff

The combination of being so close to the largest cannabis market in the US and the fact that it benefits from a ‘warm-summer Mediterranean climate’ – make it a rather attractive region to grow a lot of cannabis lawfully or not. The vast quantities of cannabis being cultivated and processed in the county are now inevitably attracting criminals from near and far willing to chance a gun for a literal ton of cannabis.

There can be no secession to the unlawful cultivation, production, and trade of cannabis without sincere movement at the federal level to ubiquitously end criminalisation. Cannabis prohibition must truly end for everyone not simply be replaced by a white-washed, gentrified, and corporatised pay-to-play system.

If reform fails to even attempt to put right the decades of wrongs and harms inflicted by racist, classist, and fascist policies. Then it guarantees a future not too dissimilar from Oregon’s current reality. The current incarnation of ‘legalisation’ in Oregon may very well be one of the best in the US, but it is still not even close to what the end of the war should really look like. 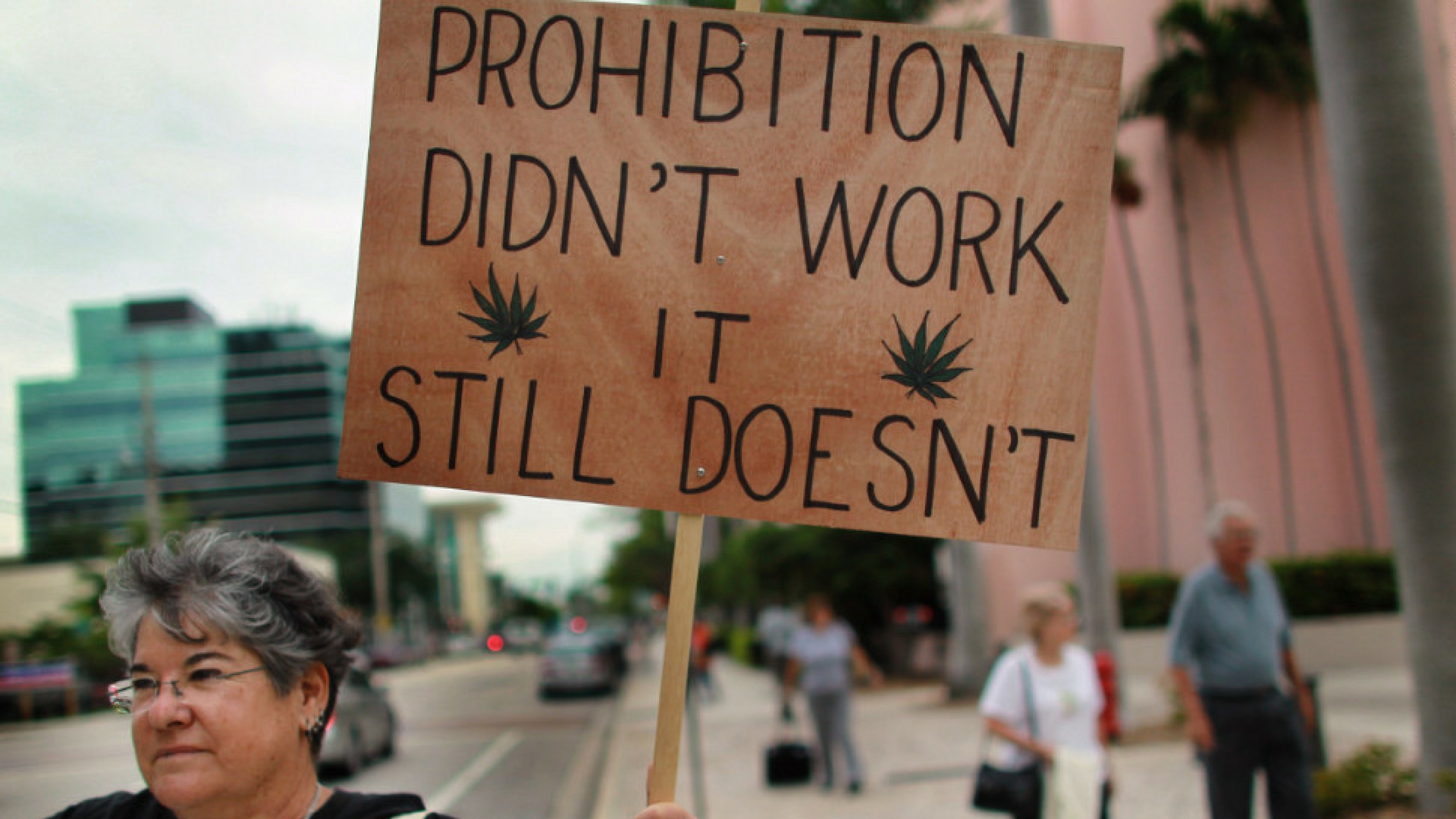